Exhibition of the artists members of the Württembergischer Kunstverein 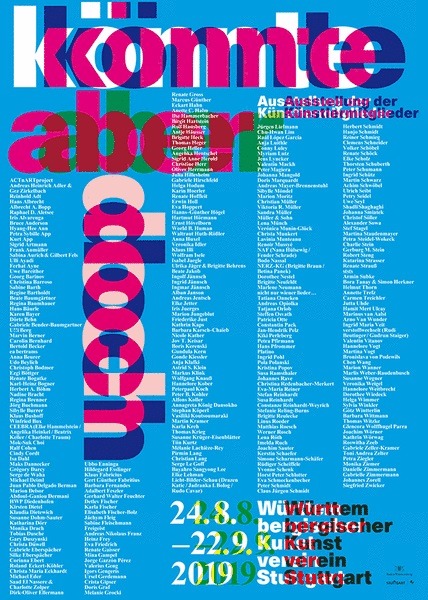 Could be, Exhibition poster
COULD BE
Exhibition of the artists members of the Württembergischer Kunstverein
24 August – 22 September 2019

“If there is a sense of reality, there must also be a sense of possibility.”
Robert Musil, The Man without Qualities (1930)

By half of all members of the Württembergischer Kunstverein are artists. Against this background, the WKV - now one of the few art associations to do so - organises exhibitions every two years for artists. The show is not subject to a selection of juries, but is merely tied to a given theme.

Nothing that is or was is necessarily as it is or was. It could also have been completely different. Based on these considerations, this year's members' exhibition will take place with about 300 participants and aims at an artistic negotiation of the subjunctive "but could". The reading of the present manifests itself in the historiography, which in its selection and focus usually plays into an ideological system. In this context it is possible for art to design alternative world models in an ironic, political but also activist way, in which the past can be reinvented as a possibility. This sense of possibility tears a gap that is as creative as it is critical into the present, a gap that at the same time couples what has been with what is to come, i.e. with a future of which we cannot yet know anything. In this context, reference should be made to the young generation, which, it is often said by the older generation, lacks experience of life and thus farsightedness. What these young people are demanding and demanding back at the moment is a future that is currently being taken away from them. They accuse a generation that, despite or because of its critical thinking, has become accustomed and adapted to those economic, industrial, military, and political conditions that can completely destroy any future livelihood. The sense of possibility which, thanks to this insurrection and with a view to the past European elections, strikes us at the break with the seemingly factual and at the demand "to think everything that could be just as good and not to take what is more important than what is not".