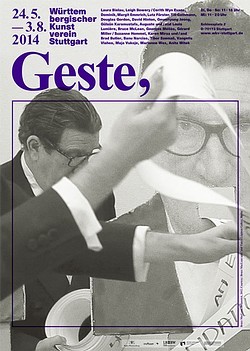 Geste à peau
In a raw, whispered voice, Suzanne Hommel describes a session with the French psychoanalyst Jacques Lacan in Gérard Miller’s documentary film Rendez-vous chez Lacan (2012). After telling him that she wakes up every morning at 5 o’clock—the same hour that the Gestapo came to get the Jews in their houses under National Socialism—Lacan jumped up from his chair and caressed her cheek in an extraordinarily tender gesture. Still today she can feel this touch, forty years later, and Hommel also claims that, though it did not diminish her pain, it precipitated a decisive shift. She understood this touch as a gesture: a geste à peau or “gesture of the skin,” with the word Gestapo turned into geste à peau—an “appeal to humanity,” as she calls it.

Triggerd by a touch, the unspeakable here was deferred through a linguistic game. An inability to speak, a linguistic gap was not cured by this gesture, but it was transformed into something different, in a play on words, a joke. It became a gag in the dual sense of the word: as something that according to the Italian philosopher Giorgio Agamben “could be put in your mouth to hinder speech” but that simultaneously references the “actor’s improvisation” through which he “compensate[s] a loss of memory or an inability to speak” (Agamben 2000, 58).

The gesture, as Agamben says, correlates with this overwriting of muteness. It showcases both, the media character of corporal movements and at the same time language as a gappy medium, a speech defect. Therefore, the gesture is “literally a definition of the gag”. It is essentially always a gesture of “not being able to figure something out in language” (Agamben 2000, 58), that “what remains unexpressed in each expressive act” (Agamben 2007, 66).

The exhibition Gesture, that is on view from May 24 until August 3, 2014 at the Württembergischer Kunstverein approaches the subject of the human gesture from a philosophical, mediatic, and artistic perspective.

It takes up the semiotic and performative character of the gesture, and its theatrical nature. It sheds light on what is enacted and at the same time masked by it: a certain disability to speak, a speech disorder, the inabilty of humans “to figure something out in language.” Thus, the focus is not so much on the gesture’s potentials of expression, but on the linguistic dilemma it references, on its character of being a gag in the double sense of the word.

At the same time, the exhibition investigates the paradoxes inherent to the gesture: the way it is situated between speaking and being silent, showing and hiding, the conscious and the unconscious, discipline and careening out of control, dancing and tumbling ...

The gesture always implies dynamism and immobility at once. It only ever appears in the interruption of a movement to which it simultaneously points. Inscribed in the gesture in a special way, therefore, are the technical dispositifs of photography and film—interrupting movements, mincing such motion into isolated gestures, and reassembling them. Thus special attention is granted to these dispositifs in the exhibition. Indeed, it was photography (since Marey and Muybridge) and film that started making visible certain ranges of motion as sequences of individual gestures—not to mention the pathos formulas and convulsions, the poses and buffooneries, which we have inherited from photography and early cinema. They witness, as Agamben has stated, the loss of the gesture. “In the cinema”, he writes, “a society that has lost its gestures tries at once to reclaim what it has lost and to record its loss.“ (Agamben 2000, 52)

Extending the concept of the “movement image” coined by Gilles Deleuze for cinema, Agamben suggests that today we should generally speak of gestures rather than images: “paintings are not immobile images, but stills charged with movement, stills from a film that is missing ... They would have to be restored to this film” (Agamben 2004, 314). The gesture and the (modern) image both equally would function as a cut—specifically, as a cut “which itself is mobile”—that separates while connecting at the same time between immobility and motion, the topical and the potential, isolation and montage.

In this sense, the isolation of images from their context and their (divergent) rearrangement appears in the exhibition not only as a cinematographic principle, but also as an artistic method.

A further aspect of the exhibition revolves around the question to what extent the regimes of class and gender, as well as the regimes of scientific fields like medicine and their apparatuses, are inscribed in the gesture. What could and would be the politics of the gesture?

Far from aiming to put forward a conclusive theory of the gesture, the exhibition seizes upon a series of theoretical and aesthetic approaches to the gesture that approximate this subject in ways that are rather widely ramified than straightforward. Tying into the project Acts of Voicing (2012), which dealt with the political and aesthetic dimensions of the voice, the pursuit in the present exhibition is to fathom the poetics and the politics of the gesture on various levels.

Apart from works by contemporary artists from the fields of visual arts, dance, and performance, the exhibition also presents a series of historical documents, references, and artworks, reaching from Daniel Chodowiecki up to Aby Warburg.