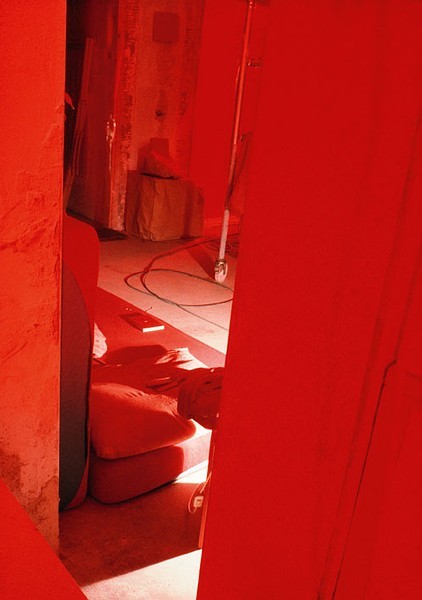 While dedicated to exploring recent positions in contemporary art, the Württembergischer Kunstverein also regularly undertakes a rereading of artistic works and practices whose approaches are rooted in the nineteen-seventies and eighties. Highly topical questions and fields of analysis are likewise addressed here, including works by Mark Tansey (2005), Antoni Muntadas (2006), Anna Oppermann (2007), and Teresa Burga (2011).

In 2013, the Kunstverein is augmenting this series with a comprehensive solo exhibition by the Stuttgart artist Platino (b. 1948), which will be shown from February 23 to May 5. The exhibition Platino: Interlacements and Centrifugal Forces shines light on the resistive potential displayed by Platino’s oeuvre, in view of both his critical stance toward the art world and capitalism and his performative, ephemeral, and process-oriented artistic practice.

The exhibition highlights the spaces of aesthetic and political agency that have been extrapolated by the artist. Posited between art and life, image and space, between private and public realms, these spaces actuate a permanent process of redetermination and relocalization of art and non-art, artwork and beholder, certainty and uncertainty.

The focus of the exhibition is trained on the so-called Externs, which are photographic “externalizations” excerpted from Platino’s long-term projects—called to life in 1979 through a perpetual aesthetic, architectural, and pictorial transformation and reinterpretation of spaces: the Red Space 1 (1979–1986), the Space 2 (1985–2003), and the Space 3 (since 2003). All three spaces have long lent themselves to use as art studio, home, and exhibition space.

Rather than serving as documentation of the entropic spatial projects, the Externs facilitate the transfer of these projects into another medium and to a different location. Hence, the Externs reflect the vanishing lines leading out of the Spaces and, in equal measure, the conduits, or interlacement, threaded between the Spaces and the external exhibition locales.

Platino, who works amid the realms of painting, sculpture, installation, photography, and intervention of an architectural or an urban nature, principally develops his exhibitions in a site-specific manner. He always intervenes in the existing situation and reconfigures it through pictorial and architectural measures that, conjointly with the other exhibition objects, engender both resonance and dissonance. As such, the idea of the Gesamtkunstwerk is invoked and thwarted at once, along the lines of a deconstruction of totalitarian spatial concepts.

Platino has developed a display for the Kunstverein that attempts to create—in terms of structure and color—varied horizontal and vertical gradations of space. It is conceived as an integral component of the installation as a whole , where the game of transformation, reinterpretation, and transfer advances: from the Spaces to the Externs to the exhibition venue.

Besides the Externs, the exhibition likewise includes a series of apparent substitutes, such as, for example, elements from Platino’s open, unfinished archive of colors. Here we encounter a collection of countless color samples—nearly infinite variations of color hues—that the artist has crafted, sorted, and detailed with very precise information about each composite over the past several decades.
www.wkv-stuttgart.de