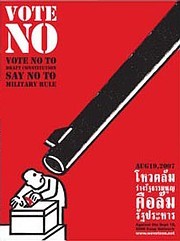 An exhibition by
Württembergischer Kunstverein Stuttgart

In conjunction with
In Charge. The Role of Political Designers in Transformation

With the exhibition Re-Designing the East: Political Design in Asia and Europe, held from September 25, 2010 to January 9, 2011, the Württembergischer Kunstverein is highlighting critical and resistive design practices in (Eastern) Europe and (South/Eastern) Asia from the nineteen-eighties through the present. Of particular focus is the role of both design and designers in the context of sweeping social, political, economic, and cultural upheaval.

Re-Designing the East is based upon a cooperation between the Württembergischer Kunstverein, the Trafó Gallery in Budapest, the Wyspa Institute of Art in Gdansk and the Total Museum, Seoul. The exhibition comprises six sections, each of which has been developed by different curators from Europe and Asia.

Contexts
Since the early nineteen-nineties, the world order that was familiar up to that time has radically and permanently shifted, especially through the fall of the so-called Eastern Bloc countries, through a global neoliberalism and the rampant development of information and communication technologies. The old concepts of the ideological “East” and “West” have become obsolete. In the far away East—as viewed from a Eurocentric perspective—countries like South Korea, Thailand, and India have (besides China) long asserted economic positions of global relevance. The onetime hierarchies beween center (the “West”) and periphery (the “rest”) has been disrupted. At the same time, there are numerous conflicts associated with the purported victory of the “Western” models of democracy and capitalism.

The title of the exhibition Re-Designing the East: Political Design in Asia and Europe already references the falloff or, in any case, the dubiousness of geopolitical ascriptions like “the East.” At the same time, the upheaval of the nineteen-eighties and nineties in Europe is to be placed into relation with that currently noted in Asia: and this against the backdrop of the question as to which role critical and resistive design practices play within these states of upheaval, meaning within the struggles for political, societal, economic, ecological, and cultural reshaping.

Here emphasis is placed on contexts such as the political transformation prevalent in the nineteen-eighties and nineties in Hungary, Poland, and former Czechoslovakia, as well as on the democratization processes—still accompanied by multifaceted conflicts today—and swift economic developments in India, Thailand, and South Korea.

Positions
The exhibition in the process sheds light on highly divergent design positions. Counting among the historical positions is, for instance, the logo of the Solidarność (Solidarity) movement created by Polish designer Jerzy Janiszewski. Also explored is the work of Czech designer Joska Skalník, who was actively involved in the so-called “Velvet Revolution” and who today, however, is faced with the accusation of having been an informant for Czechoslovakia’s secret intelligence system.

Among the positions currently explored is the Indian network Design & People which furthers sociopolitical projects, thus making freely available, along the lines of the “copyleft,” its creative works as well as its knowledge for noncommercial purposes. The Thai designer Pracha Suveeranont in turn presents his extensive boycott campaign—developed in 2007 and directed against the establishment of a new constitution by election in Thailand—along with other graphic works that reference the current societal and political conflicts within the country.

The South Korean group Activism of Graphic Imagination (A.G.I.) is likewise engaged in activist contexts. Their works demonstrate opposition to the repressive politics reigning in South Korea, which have arisen through unchecked turbocapitalism and also through a newly emerging “Cold War” atmosphere.

The curators participating in the exhibition were given free reign both in conceptualizing their sections and in selecting the involved designers. Here the project fathoms the possibilities and limitations of multiperspectival, process-oriented curating.

A conference will accompany the opening weekend of the exhibition Re-Designing the East. Following the exhibition will be a publication on the project.
www.wkv-stuttgart.de