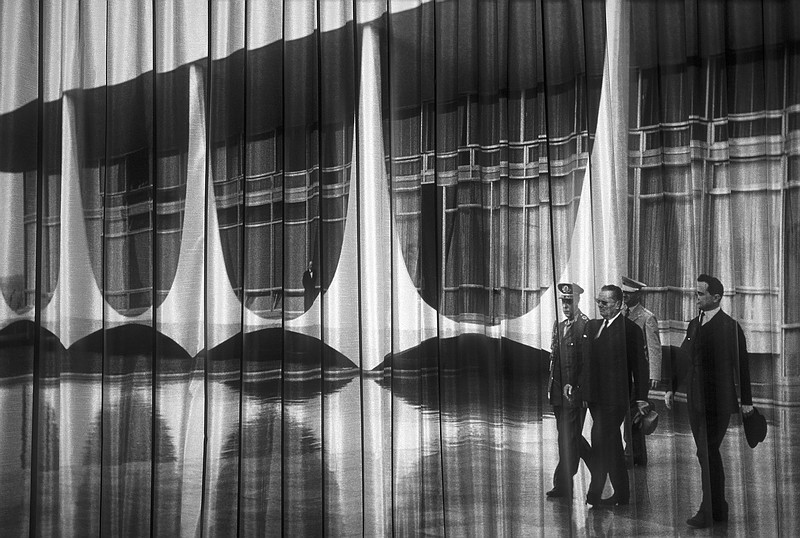 The point of departure for this exhibition, on show at the Württembergischer Kunstverein from May 27 to August 6, 2017, is a particular place, Tito’s bunker in Konjic (Bosnia and Herzegovina), which is equally negotiated as concrete location and as open-ended metaphor.

From 1953 to 1979, the former head of state in Yugoslavia, Josip Broz Tito, initiated the top-secret construction of a gigantic and—at least theoretically—nuclear-safe bunker in Konjic, a town situated around 40 kilometers south of Sarajevo (and today located in Bosnia and Herzegovina). This shelter, drilled 300 meters deep into the mountain and occupying a space of 6,500 square meters, was conceived for the survival of 350 chosen representatives of the country’s political and military elite of that time—including just one woman: Jovanka B. Broz, Tito’s wife. Tito himself outlived the accomplishment of the structure by just one year.
Not until the 1990s did the existence of this construction project, which cost 4.6 billion US dollars, become public knowledge. At this time, still no global atomic war had happened, fortunately, but the nation (or more precisely: its “elites”) that was (were) to be rescued in this bunker had disappeared: it was quasi atomized.

In 2011, the two artists Edo und Sandra Hozic succeed in launching the Project Biennial D-0 ARK, whose site was to be Tito’s Bunker. From the very beginning, their aim has been to amass a collection of art through the biennial that would ultimately serve as a basis for a museum in the bunker.

Iris Dressler and Hans D. Christ have been invited to curate the 4th Project Biennial. Parallel to this project, they are developing an exhibition for the Württembergischer Kunstverein. The idea is to approach the bunker both in the very heart of the place itself and from a distance—in its absence or as a kind of phantom.

While their project for the bunker, which already features over 120 works of art from the previous biennials, will be limited to six new artistic interventions, the aim in Stuttgart is to bring into play, based on a broad spectrum of artistic work, various lines of reference and associations: ranging from the Second World War to the siege of Sarajevo to recent wars of the early 21st century; from the nuclear threat to the “ghosts” of the Cold War and to the threat of impending ecological collapse; from the bunker as a “living machine” and survival shelter through the museum ́s system to the Biosphere 2: a failed experiment carried out in the 1990s to prepare for an escape to Mars.

The exhibition examines fictions of control, salvation and escape. It is about the "zero hour" as a post-catastrophic projection surface, about structures of selection—which are both the bunker and the museum—as motifs of camouflage and repression, about dystopian as well as utopian spaces. The invited artists take up these and other aspects both directly and indirectly.

To more than twenty artistic works—including video works, extensive photographs, installations and objects—include those produced for Tito's bunker and further developed or reproduced for Stuttgart. They deal in particular with the infrastructure of the bunker as well as its planned transformation from a military shelter into an art and military museum.

In addition to the artworks, the exhibition also includes a number of historical and contemporary reference materials, including the cult film Atomic Café of 1982 (directed by Jayne Loader and others), various magazines, like for example Galaksija a magzine for science and science-fiction published between the 1970s and 1990s in Yugoslavia or information on the "Central Storage Site of the Federal Republic of Germany ", which is located in a disused silver mine in Oberried. Here, the German cultural property on microfilm is now protected in 1,500 stainless steel containers against wars ...

A series of film screenings, lectures, guided tours and other events will take place during the exhibition. The films include Marcel Ophül's Veillées d'Armes (1994) about the siege of Sarajevo and "Journalism in Times of War" as well as Jimmy T. Murakami's moving animation film When the Wind Blows (1984), which highlights the lack of opportunities for nuclear weapons.