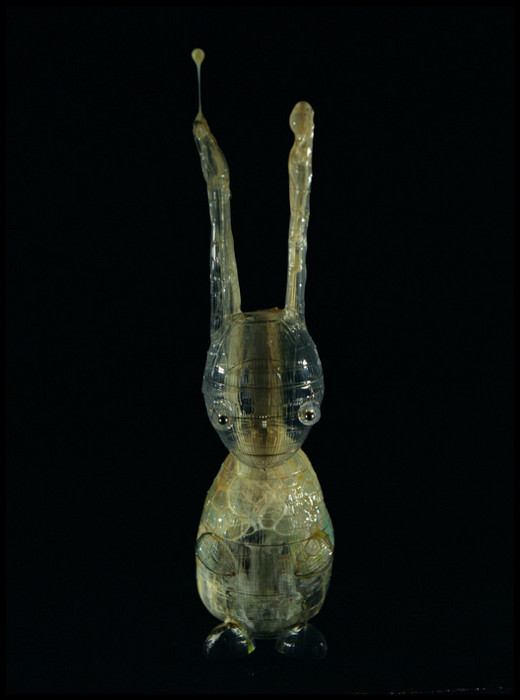 Deadline
video for projection
18 minutes
Maureen Paley is pleased to present Saskia Olde Wolbers’ second solo exhibition at the gallery. In her new video work Deadline, the camera traces colourfully patterned snake-like bodies moving across an abstract landscape inspired by African modernist architecture. The narrator recalls an assembly of overheard stories of local legends from a small fishing community in The Gambia.

...So here I am in a vacuum-sealed air-conditioned airport. In front of a smiling stranger that yet looks so familiar. Do I see rightly under his arm a book, with on the cover a photograph of father’s bush-taxi? And the title; Deadline, by Lamin the first Bojang. Underneath in smaller italic letters a quote I think. “Do we all have journeys mapped out in our central nervous systems like migrating birds? It seems the only way to account for our insane restlessness.” And in even smaller letters, “The remarkable story of an epic voyage undertaken by a man in his desire to travel away from the everyday squalor of his region, that sees him drive a bush taxi from his native Gambia to an airport in Nigeria in a failed attempt to catch a plane to Greece. He spends sixteen months on the road working his way through eight West African countries.” Your journey to an airport will never seem that long again . . .

Saskia Olde Wolbers has had recent solo exhibitions at the Musée d’Art Contemporain de Montréal in 2007 and The Falling Eye, at the Stedelijk Museum CS, Amsterdam in 2006. Her work was also shown in The Plain of Heaven on the High Line in New York, organised by Creative Time in 2005. She will be included in the forthcoming exhibition, The Cinema Effect: Illusion, Reality, and the Moving Image, at the Hirshhorn Museum in Washington, D.C. She also has solo exhibitions scheduled for 2008 at the Art Gallery of York University in Toronto and the Mori Art Museum in Tokyo.