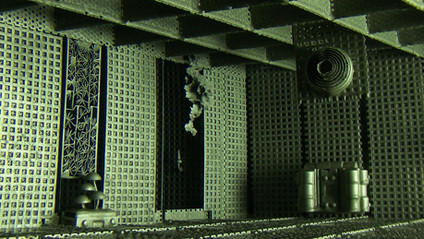 Maureen Paley is pleased to present a new video work Pareidolia by Saskia Olde Wolbers, in her third solo exhibition at the gallery. Recently shown in her solo exhibition A Shot in the Dark at the Secession, Vienna in 2011, this is the first London screening.

Pareidolia’s narrative is based on the events surrounding the creation of Eugen Herrigel’s book Zen in the Art of Archery. The German author’s interpretation of Zen archery pivots on an incident he observed while living in Japan in the 1930s; the shooting of two arrows – one bisecting the other – by his eccentric archery master, Awa Kenzo, in a darkened hall. “It, the Divine, has shot!” the master allegedly exclaimed, although the presence of a translator has since been disputed, raising questions of subjectivity, interpretation and belief.

Pareidolia is told from the point of view of a fictional translator between the master and his German apprentice, and the translator’s alter ego, a bird. The title points to the need for caution in storytelling: Pareidolia refers to the tendency of human perception to discover meaning in random structures. The film’s visuals are shot inside model sets of a university lecture theatre, an archery hall and various traditional Japanese interiors that fold into themselves, alternated with animatronic birds drinking from dripping plants. The soundtrack is composed by Daniel Pemberton.

Saskia Olde Wolbers was born in The Netherlands in 1971. Recent solo exhibitions include A Shot in the Dark at the Secession, Vienna in 2011 (with accompanying catalogue), and at the Goetz Collection, Munich in 2010. Olde Wolbers has had previous solo shows at the Art Gallery of York University in Toronto and the Mori Art Museum in Tokyo. Other recent exhibitions have included Monanism, Museum of Old and New Art, Tasmania; The Cinema Effect: Illusion, Reality and the Moving Image, Hirshhorn, Washington; and Automated Cities, San Diego Museum of Art, San Diego. She lives and works in London.
www.maureenpaley.com