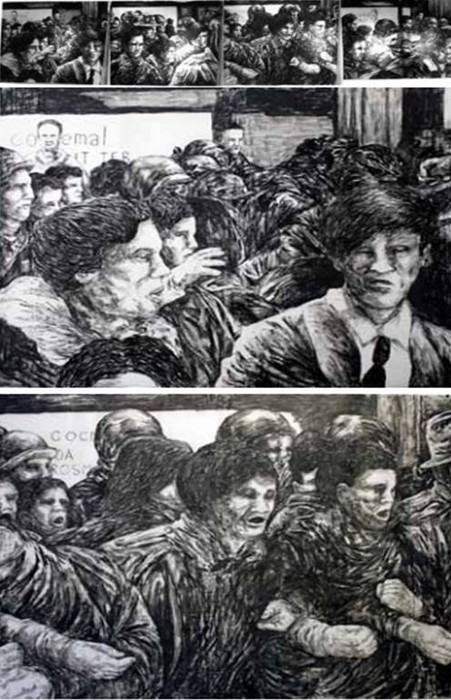 Special Thanks to: Antonopoulou Art, The Apartment, The Breeder, Gazon Rouzze

«Evolution ID» is the first curatorial project of the QW3RTY team.

Contemporary artists of the avant-garde scene and leading graphic design teams are invited to reflect and encode, respectively, the concept of individual and collective identity. Thirteen graphic design teams create a graphic logo and an application for each artist. The visual art works, the logos and the applications, all coexist in an exhibition with original and free from stereotypes results.

The exhibition aims to highlight the role of individual groups within the larger experience of social life and to create a space where two groups of artists and two art practices may coexist and engage in dialogue with one another. Contemporary design –the visual expression of collective identity– and contemporary art –the expression of an inner quest for personal identity– are brought together in an exhibition featuring original, stereotype-free work.

The Totem, Coat-of-Arms and Logotype are the visual emblems or representations of three distinct social structures that correspond to three stages in the evolution of civilization. Each typically conveys the notion of a group’s collective identity, which emanates from shared concerns and experiences, common language, values and beliefs, the sense of solidarity that unites the members of a social group, or of a society at large.

The Totem is the visual parallel of a primitive social structure, Totemism, which many scholars believe to be a necessary universal phase in the evolution of mankind. The totem may represent an animal or plant, a space or force of nature. It is the group’s ancestor, whose characteristics are inherited by all group members. It is a benevolent spirit, invoked by members of the group for assistance. The totem is the father of the race: all who belong to it are family. The totemic system replaces kinship of blood with that of the totem and is the basis of every social duty and moral rule that members of the tribe must obey.

The Coat-of-Arms is the emblem of another social structure: the feudal system. The use of armorial bearings as a means of establishing identity and status among the European nobility became popular during the twelfth century AD, in the heyday of feudalism. These emblems would soon become a source of pride for their holders, as they not only attested their identity but were also the symbols of a legacy, of their allegiance to political and religious ties. As a result, armorial bearings included specific symbols whose arrangement followed an explicit protocol (blazon). The use of these illustrated insignia gradually extended beyond the battle field and coat-of-arms privileges were likewise conferred upon merchants and noblemen.

The Logotype is a graphic sign or emblem frequently used by commercial companies, associations or even individuals as a means of rendering one’s identity immediately and universally recognizable. The logo’s particular style and design suggest the company’s distinguishing mark and communicate its intentions and status. Logos are the visual representations of a corporation’s identity. The corporate identity is crucial in terms both of the company’s public profile and of how the company is regarded by its employees, who are called upon to conform to that particular identity; in fact to adopt it so that they may in turn help establish it beyond the company’s bounds.

Therefore, the logo could perhaps be seen as the visual parallel of contemporary social structures, where personal identity depends on an individual’s profession. Contemporary lifestyles require of the individual to spend the better part of the day at the workplace and to channel much of their energy into achieving professional goals. Individuals thus tend to identify with the common characteristics of their work team even beyond the workplace itself, across their experience of social life.

Durkheim’s thought attaches great significance to the moral edification of the individual through symbols. The potential transformation of symbolic content along an evolutionary line that seems to connect the totem, once a purely religious-moral symbol, with the contemporary logo – which rather evokes the individual’s relationship to modern consumer society and commodity fetishism– could perhaps anticipate a turn toward new forms of social solidarity born of a contemporary worker consciousness, itself hammered out in the context of the workers’ relationship to the company. Consequently, it might be possible to resist the transformation of symbols from visual signs associated with the moral edification of society to visual signs promoting a false moral awareness that is the result of consumerism and the demystification of the world.

On the premise that the artist seeks to articulate a personal identity amidst an abundance of social stimuli, 10 visual artists and 10 designer groups attempt to offer a commentary on the relationship between the individual and society, between personal and collective identity.

Thirteen contemporary artists are invited to create work that contemplates the issue of collective identity and sense of belonging. Thirteen graphic design teams attempt to codify the message each work carries and to communicate it using the tools of contemporary branding practices.
www.art-tounta.gr