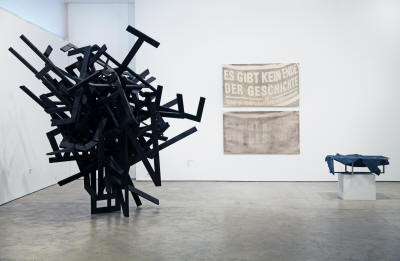 PRE-TEXT is the first part of the exhibition This Is A Historic Opportunity For Us with major support from NEON.


Pre-Text is the first part of the large scale exhibition This Is A Historic Opportunity For Us (title taken from Antonis Pittas’ work). The idea of this exhibition came up as an internal need and an immediate response to the socio-political crisis that Greece has been through since 2009 as it is one of the first European countries to confront the aftermath of the global crisis. This Is A Historic Opportunity For Us is a project that has been designed since 2012 aiming to find the appropriate venue to host the exhibition in a European metropolitan city.

Pre-Text refers to socio-political conditions with connections to political history and our perception regarding historical knowledge. Through the works, the viewer “reads” a concrete political meaning that depends upon the dialectic of individuality and collectivity at play within a social system. They conjure up a universe of individual worlds that invoke contemporary awareness and use it as a prism through which to look upon how we experience reality. The artists explore areas where there are no rigid distinctions between theory and practice; where the boundaries between the two seem to blur.

Pre-Text questions the ways in which the past is conceptually and contextually reoriented towards the future. As a great number of contemporary philosophers argue “prior” is the new “after” and the notion of time transforms accordingly to continuous changes of social conditions. The viewer faces an up-to-date historical record of art that confronts the future as the present, art that talks about the future with works, created the last five years and function as knowledge tools to understand the present by reflecting it to the future.

The works suggest different readings and interpretations that aim to provoke the viewer’s perception regarding global sociological issues that affects one’s perception and individual participation to a collective “status quo”.
Through the painting of Dimitris Andreadis (Untitled, 2014) the viewer recognizes and re-evaluates familiar images, which prevail in a black background with the use of chiaroscuro treating light and shades in a strong emotional current. The artist proposes an open conceptual framework that invites the viewer to generate his own correlations. The artist captures the momentum and the “magic power of transubstantiation”.

Kostas Bassanos’ (Smudge, 2013 & Constitutional White, 2012) poetic approach emerges through the use of minimal means, be it a snapshot when it comes to videos, or some ink or a sheet of paper when it comes to sculptural works. With references to romanticism - sometimes visible and other times merged in a strict and simple visual vocabulary - the artist attempts a conceptual investigation of the perception of reality through the tradition of late modernism.

The two paintings of Kostas Christopoulos (Untitled, 2012) re-introduce the title of Francis Fukuyama The End of History? published in the international affairs journal The National Interest. Christopoulos borrows the End of History which was used as slogan in a public protest in Berlin. The artist removes the question mark from Fukuyama’s original phrase attempting to declare his personal thesis about the End of History. Christopoulos connects the notion of history and its evolution with the current socio-political conditions that are being defined by the international politics. Expanding this thought the artist wishes to criticize the individual’s ambivalent position in an insecure social environment.

The unique gesture in Panos Famelis’ painting (The Wave, 2013) raises the issue of accumulation of the image and material on the surface of the canvas. The viewer encounters a work, which viewed from different distances, changes in composition. The work raises questions of memory and history in a timeframe that seems to signal the end of an era. The contradictions that arise are a result of empirical knowledge and emotions, which are constantly tested by the very meaning of experience and the individual’s perceptual ability of it.

The work of Dimitris Foutris (The End Of It All, Before The End, After The End, End End End, Part 2, 2011) focuses on the concept of nature. It questions nature and the relationship of the Byzantine landscape, specifically on the idea of the cliff that mobilizes our conscience towards meditation, melancholy and optimism on the other, concerning the current situation and its social implications and the ability to perceive depth. Furthermore, it suggests the concept of “the self” as a Landscape or mountain related with the notion of “the desert”, the biblical desert from the Byzantine era.

Pavlos Fysakis (Untitled, 2011-2013) has been always preoccupied with the idea of boundaries. As a photographer, he is interested in the human order of things, constantly debating the solidity, or the fluidity of those territorial, cultural, social, and personal boundaries that define and position us within a society. In that quest, the artist creates imaginary narratives through a geographic exploration of space, documenting culture, identity and social phenomena such as urbanization, isolation and transition

Set over four days of unrelenting wind and rain in a remote village high up in the Nafpaktia mountains in the west of Greece, the film of Christina Koytsospyrou & Aran Hughes (Waiting for the Past, 2012) follows the lives of two shepherd families struggling to live. The village, now forgotten and nearly deserted, has had its best days. Combining documentary and fiction with an all-local cast, Waiting for the Past is both the reality and an unsettling allegory of today’s Greece.

Irini Miga’s works (In Between, 2012 & The Alluring Warmth of Tolerance as a Habit, 2012) examine dismantled classicism. Within this transitional socio-political period in Greece, she declares herself as a utopian architect creating forms as skeletons, as basic structures that echo the past and suggest a shift in the perceptions of our current reality. The artist invites the viewers to contemplate the way history may repeat itself. Speed is today’s token towards tomorrow, and chasing a lustrous future allows us the privilege of forgetting.

Fryni Mouzakitou (Aluminum Rolls, 2014) presents two large scale paintings imitating the aluminum rolls that secure the facades of the commercial stores. The artist makes a political comment on the boundaries and the borders that define the financial crisis which influence the social life of the contemporary society. The banned exterior of an edifice creates the sense of unfamiliarity to the viewer and defines a secret space between the work and the viewer. Mouzakitou provokes our thoughts about the side-effects of a society in a precarious condition.

Alexandros Papathanasiou (Do Not Worry About The Government, 2012 & Intention, 2012) focuses on found, invented and intervened objects that are brought together in arrangements that reveal and underline the process of making, by pointing out the moments of decision-making and affirming those of profound hesitation. An eccentric discourse and a conceptual panning between “what is” and “what might be” that renders tangible the space between the object and the art-object; namely the blind spot of society’s vision, where Art manifests itself by encountering its own existence.
Theo Prodromidis’ (Goodbye...etc, 2013 & Element For The Support Of New Structures Bronze, 2014) latest works formulate a critique of the political sign and deal with a number of issues: formal, social and historical. The artist collaborated with Aggeliki Papoulia, actress and founding member of blitz theatre group, and together produced 524 new sentences by using the method of Tristan Tzara on a collection of 524 books. The books were given to the artists as a response to their call for printed material that is relevant in formulating the discourse of the Left. One of the outcomes of this process is the publication of a handbound book limited to an edition of 16, after a 16-hour long performance that lasted two days.

The works of Kostas Sahpazis (Carried in Pockets, 2012 & Untitled, 2012) suggests an imaginary stage which is activated by materials stacked together, layered one on top of the other, or organized through their form. The central narrative unfolds around the simultaneous holding of two contradictory positions: that of materiality and that of unconscious space. At the end the viewer can recognize that the objects have been arranged by an instinctive mechanism of decision as well as by a sudden intrusion of an alien idea.

The film of Eva Stefani (Ill Not Ill, Athens, 2011) explores a day in the life of a Greek hospital in central Athens. By following various incidents that occur during the day between staff and patients, the documentary attempts to offer a surreal portrait of what it is to live in Greece right now. The film constitutes a documentation regarding Greek-society’s welfare status.

In Texas, Dimitris Tsoublekas’ photographic series, one recognizes the infinite freedom of vision. What the artist initially saw and which we now also see - landscapes, human figures, interiors - always seems to result from a battle with time, a battle with himself. Abandoned buildings, rooms with collapsed walls or natural barriers, people who are shadows of themselves in front of their glasses, demonic children, lonely men looking elsewhere are the evidence of a desire for freedom verging on destruction.

The work of Kostis Velonis (At the end of Demonstration Day, 2009) offers an image of loneliness, anxiety and fear. At the end of the day, after protesting and rallying, the demonstrator is left alone with a feeling of sorrow, loss and contemplation. The poetic strength of this tender work rests on the psychological and emotive human condition suggested by the isolated stool.
www.art-tounta.gr